scroll down
for pleasure
CZ | EN


Waking up in wineyard

Only on Salabka you may experience the kings view over the wineyard right after you wake up. Explore what is waiting for you and come enjoy the sensation on your own.

The interiors are characterized by balancing tradition with the lightness and clean lines of contemporary design – the sensitive reconstruction preserved the original style of the baroque homestead invigorated with the contemporary style of French vineyard houses.

You will find a total of 6 apartments either in the Provence style with the names of herbs – Lavender, Rosemary, and Cassis, or symbolizing the traditional grape varieties grown at Salabka – Riesling (also a wedding apartment), Neronet and Pinot Noir.

Stylish furnished apartment with sloping ceilings and exposed beam rafters. There is a large double bed and another single bed, a small table and chairs, small kitchenette with fridge, hob and basic equipment, the bathroom with shower. View is to the northern courtyard, which in summer is lined with beautiful roses.

One of the three herb apartments is called according to the black currant as one of aromas and flavors that you can feel in our wines from the vineyard Salabka. 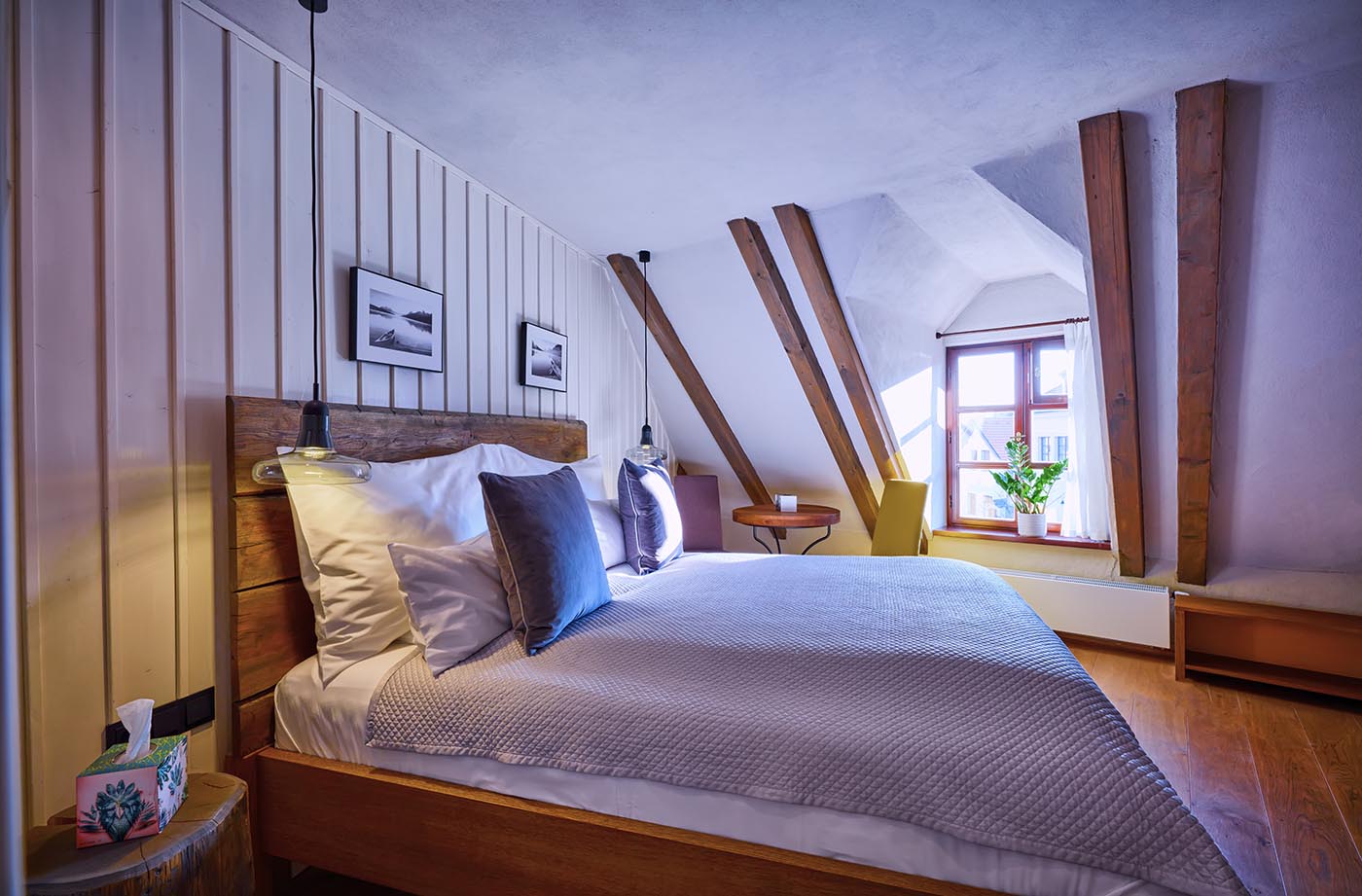 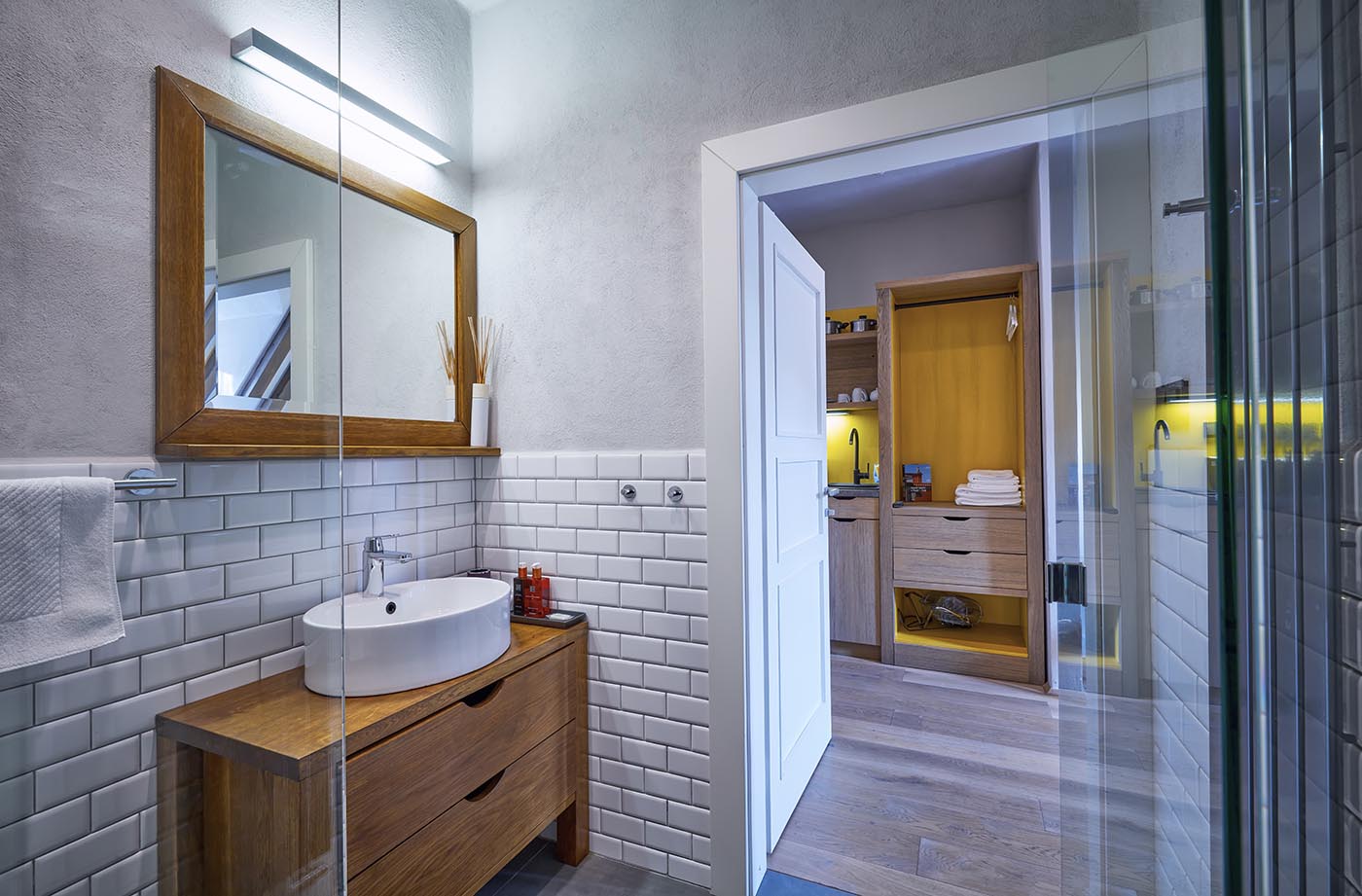 Stylish furnished attic apartment with sloping ceilings and exposed beamed beam, wwhole tuned in blue-green color. There is a large double bed, a table with two chairs, a small kitchenette with a refrigerator, a hob and basic equipment, a bathroom with a shower. View is to the northern courtyard, which in summer is lined with beautiful roses.

One of the three herb apartments named after rosemary, typical herb of Provence in France, whose style is undoubtedly reflected in this apartment. 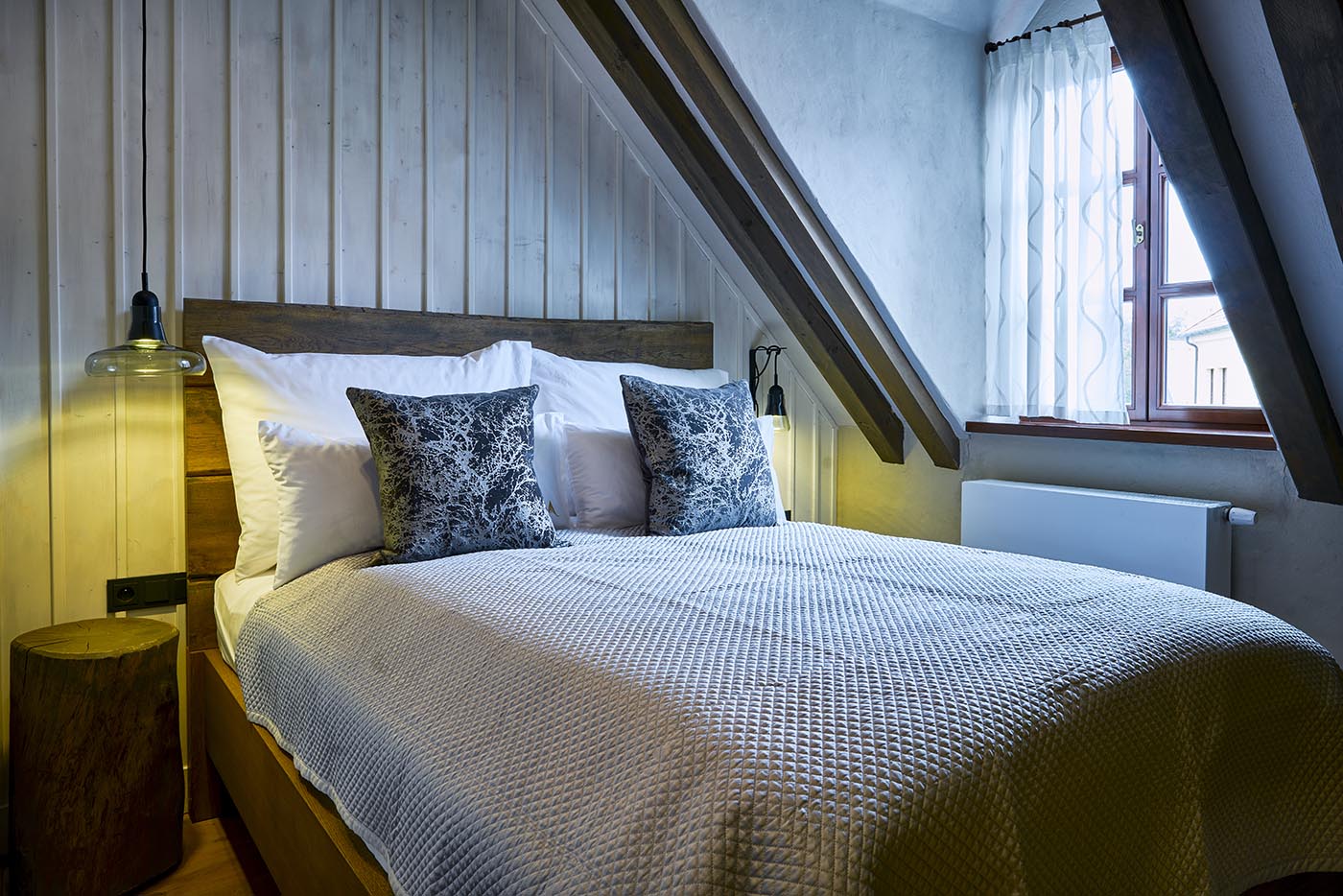 The apartment is decorated in lavender-violet color and in the style of Provence. The pleasant atmosphere is also provided by the sloping ceilings and the exposed beams. There is a large double bed, a table with two chairs, a kitchenette with a refrigerator, a hob and basic equipment, a bathroom with a shower. The apartment has a view on the northern courtyard, which is surrounded by beautiful roses in summer.

One of the three herbal apartments named after lavender, as a typical plant in the French province of Provence, which has become an inspiration in arranging this apartment. The lavender motifs appear in the room, the bathroom and the lavender itself even in the outdoor greenery. 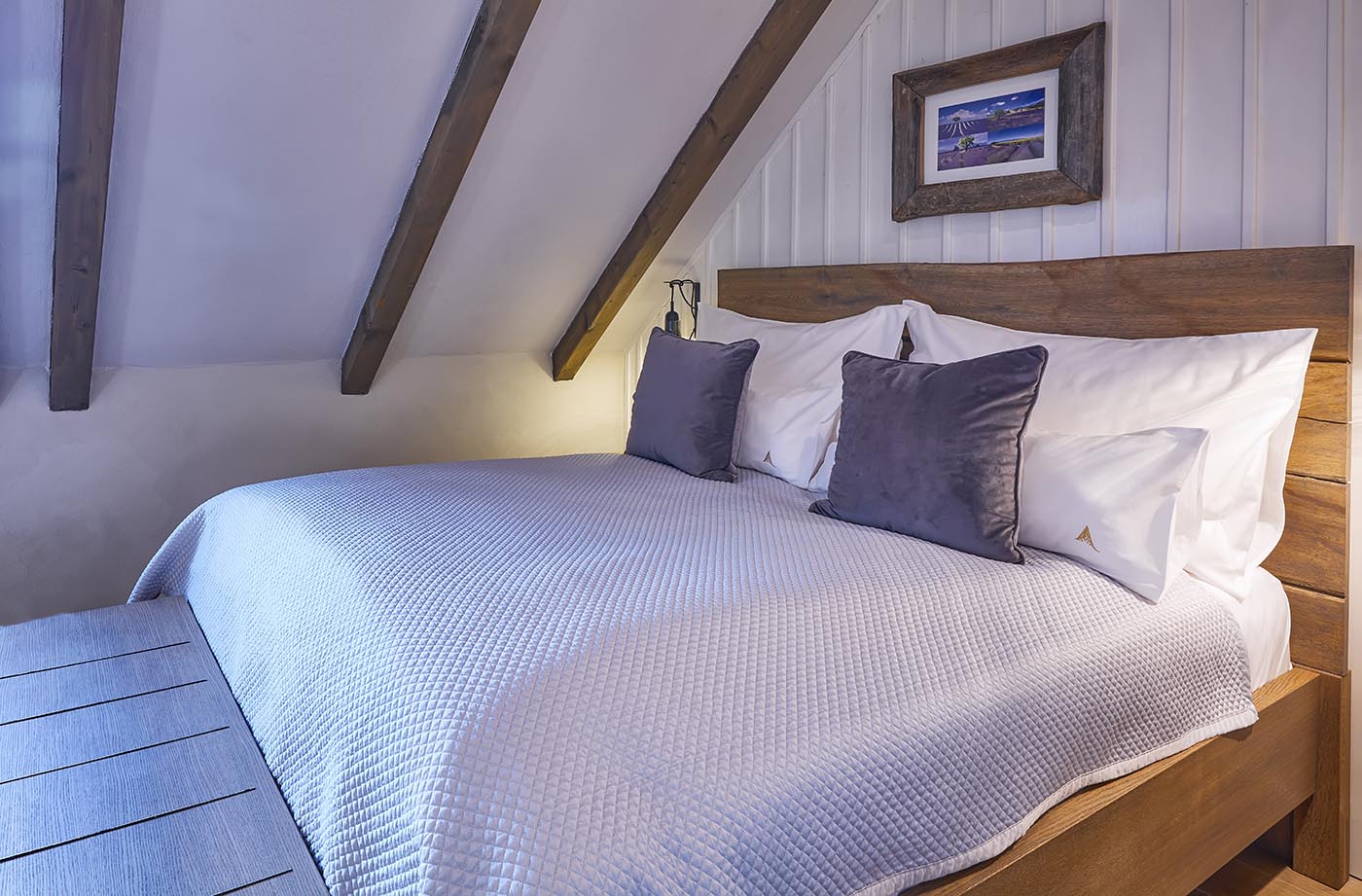 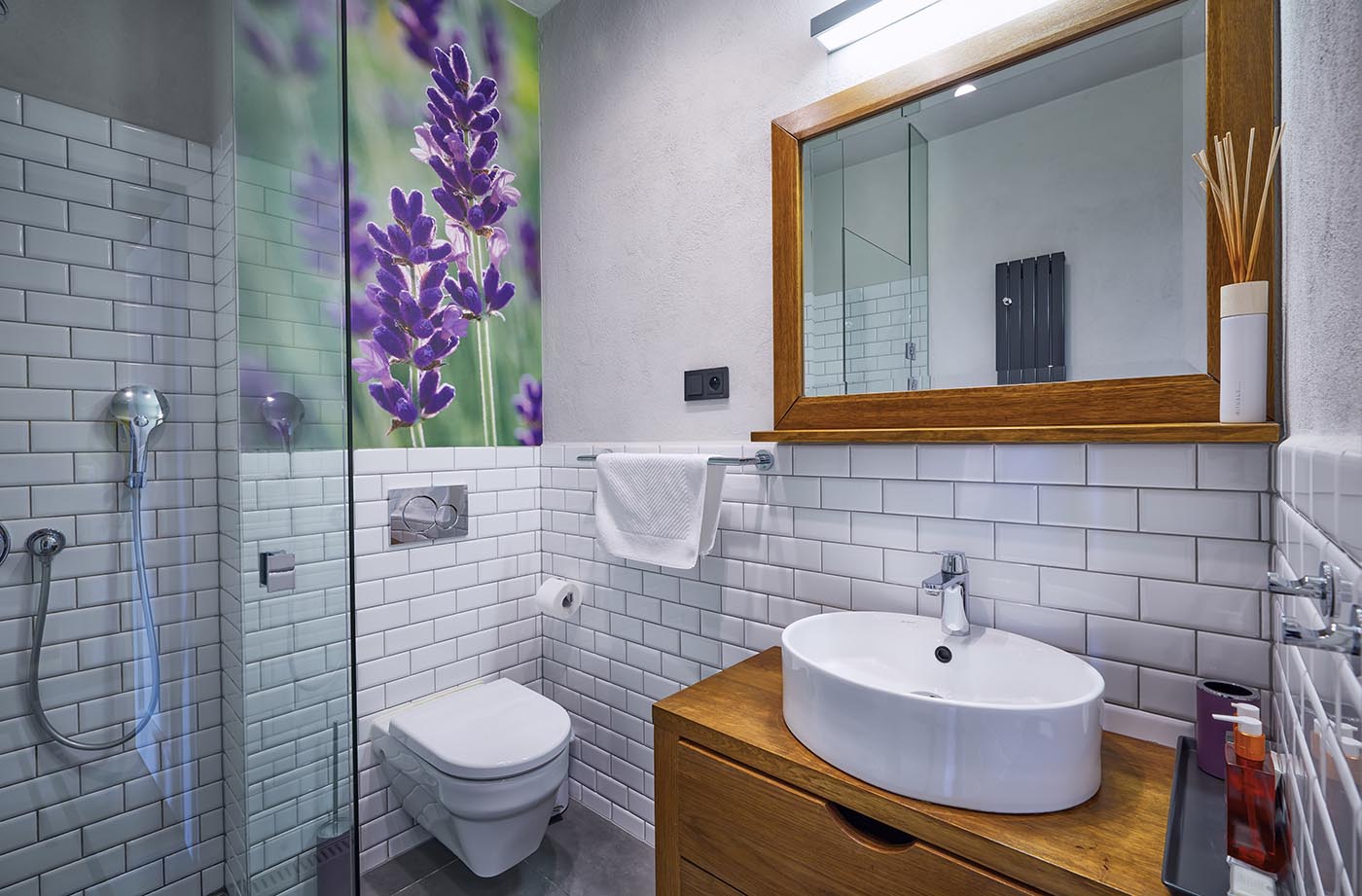 Spacious apartment with a separate bedroom with a king-size bed and storage space. From the small hall, you can enter into the bedroom, a modern bathroom with a bathtub, or a spacious living room with a sofa bed, a coffee table, a dining table for 4 people and a kitchenette with all the amenities (hotplate, fridge, dishwasher, dishes ...). The view from this apartment is on the so called northern courtyard, which is bordered by beautiful roses throughout the summer.

One of the three wine apartments named Pinot as the main variety of red wines of the Salabka vineyard. 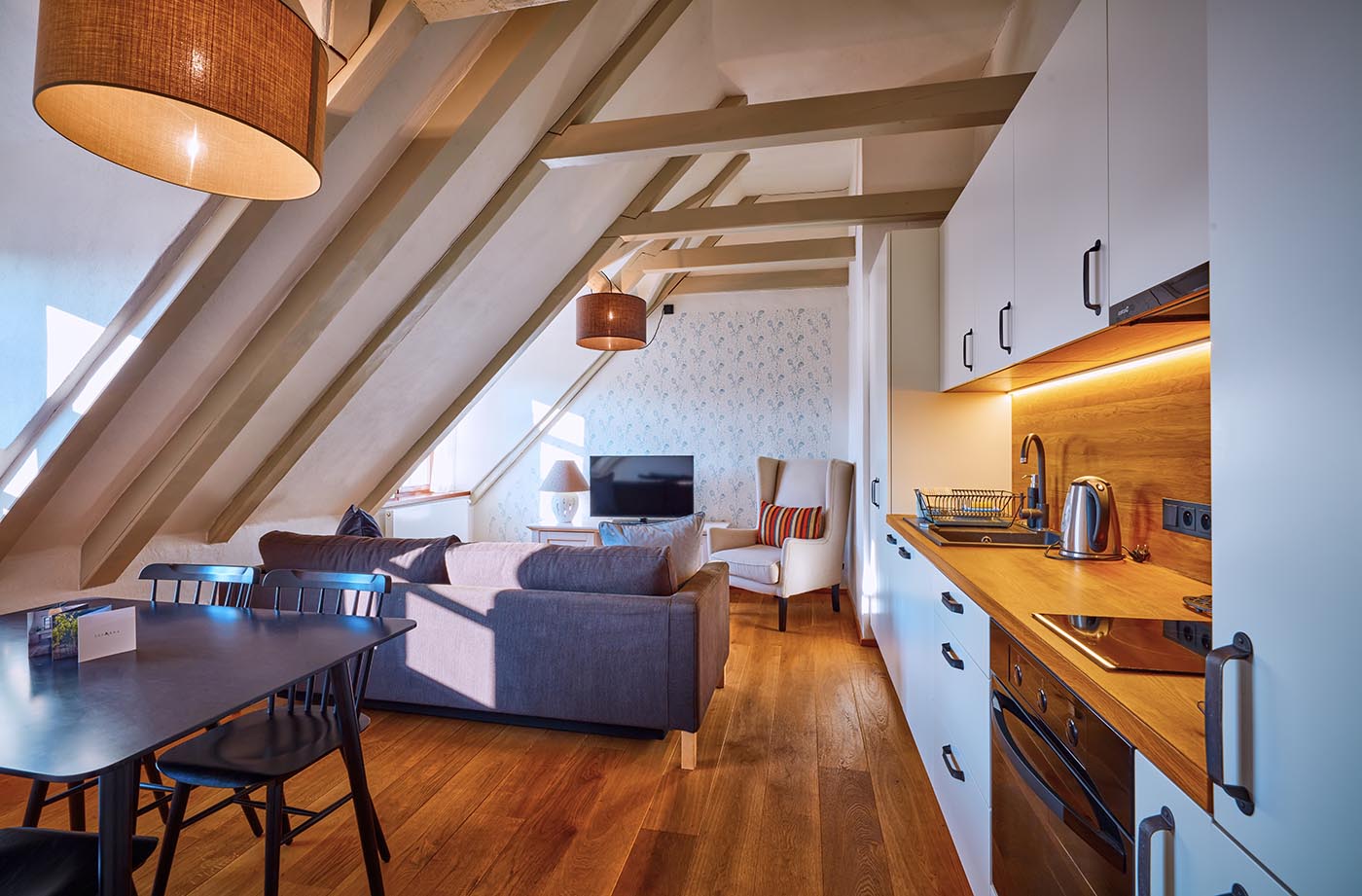 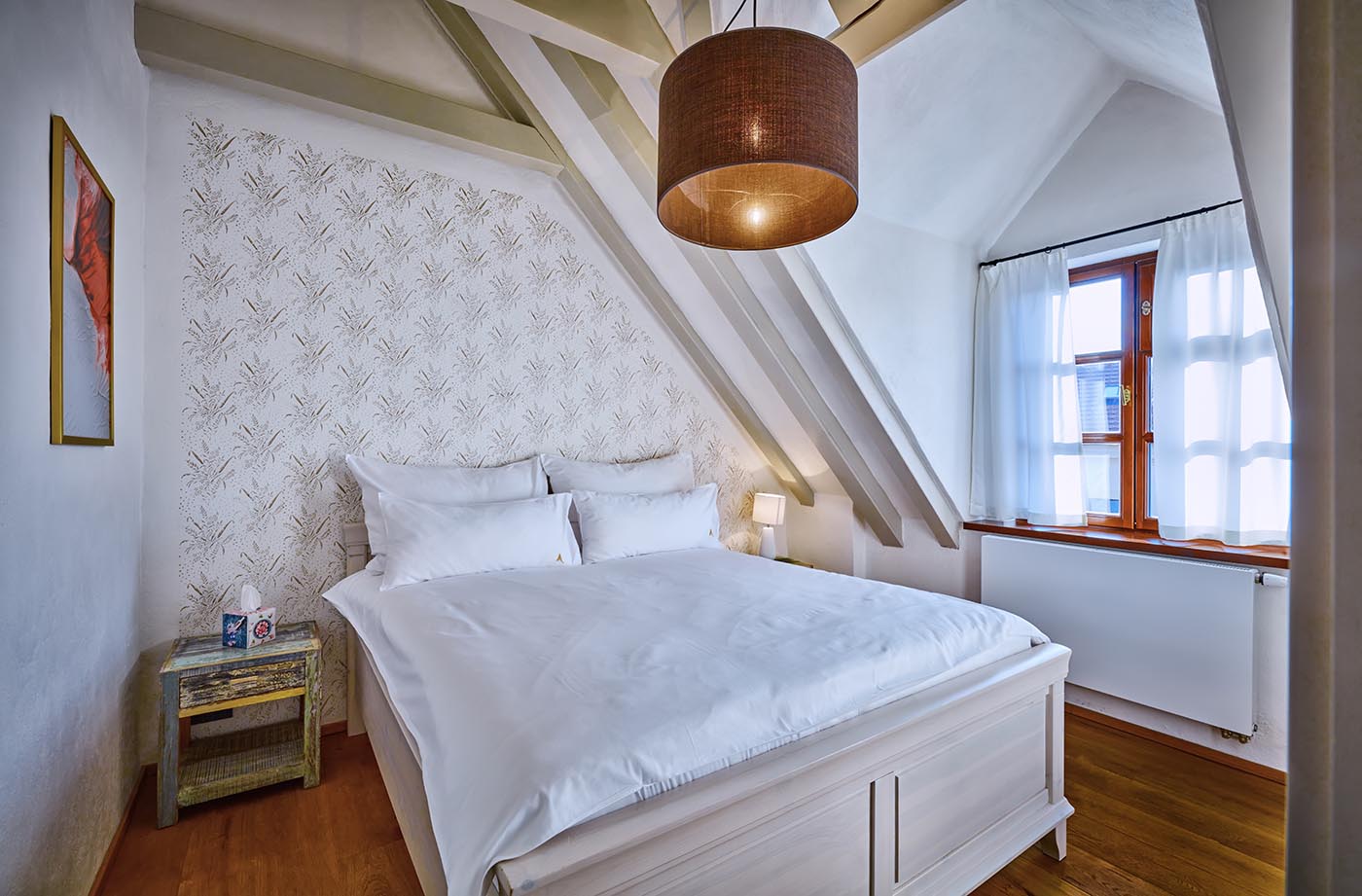 The apartment has a colorful living room with a double bed and a seating area with a vinotheque where you can find several bottles of our finest wines. If you walk down the two steps to the hall, you will find a sophisticated built-in kitchen equipped with a hob, fridge, sink and other basic kitchen equipment. The apartment also features a modern bathroom with a shower. This apartment is for up to 3 persons (double with an extra bed option). From the apartment there is a beautiful view right between the vineyards of Salabka vineyards.

One of the three wine suites, named after the unusual variety of Neronet wine, used more for cuvée (varieties used to blend with less colorful wines with a distinctive dye not only in berries but also in pulp). 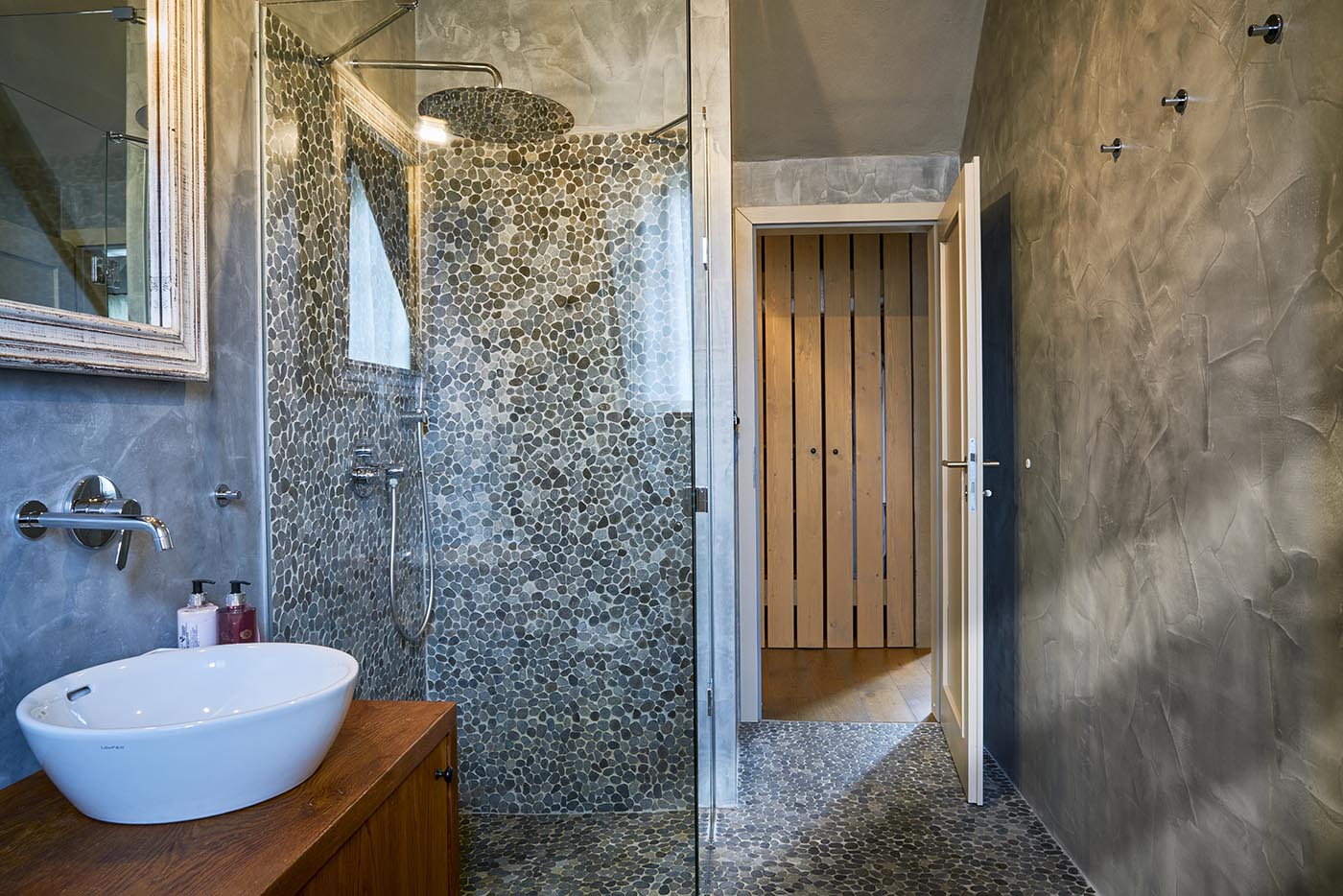 Wedding apartment, modern but romantically furnished but not only for newlyweds, also for all who want to spend a romantic night in an original and luxurious environment. The apartment is white-colored (Riesling-white wine) and besides a large double bed decorated with white curtains, It offers a seating area with a winotheque where you can find the best wines from our vineyard. In the hallway there is an elegantly hidden small kitchen with a fridge, hot plate and basic kitchen equipment, and a bathroom with a bathtub. From the window there is a beautiful view of the Salabka vineyard.

One of three vintage apartments named after Riesling as a carrier of the white wines of the Salabek vineyard and the oldest wine plants here. 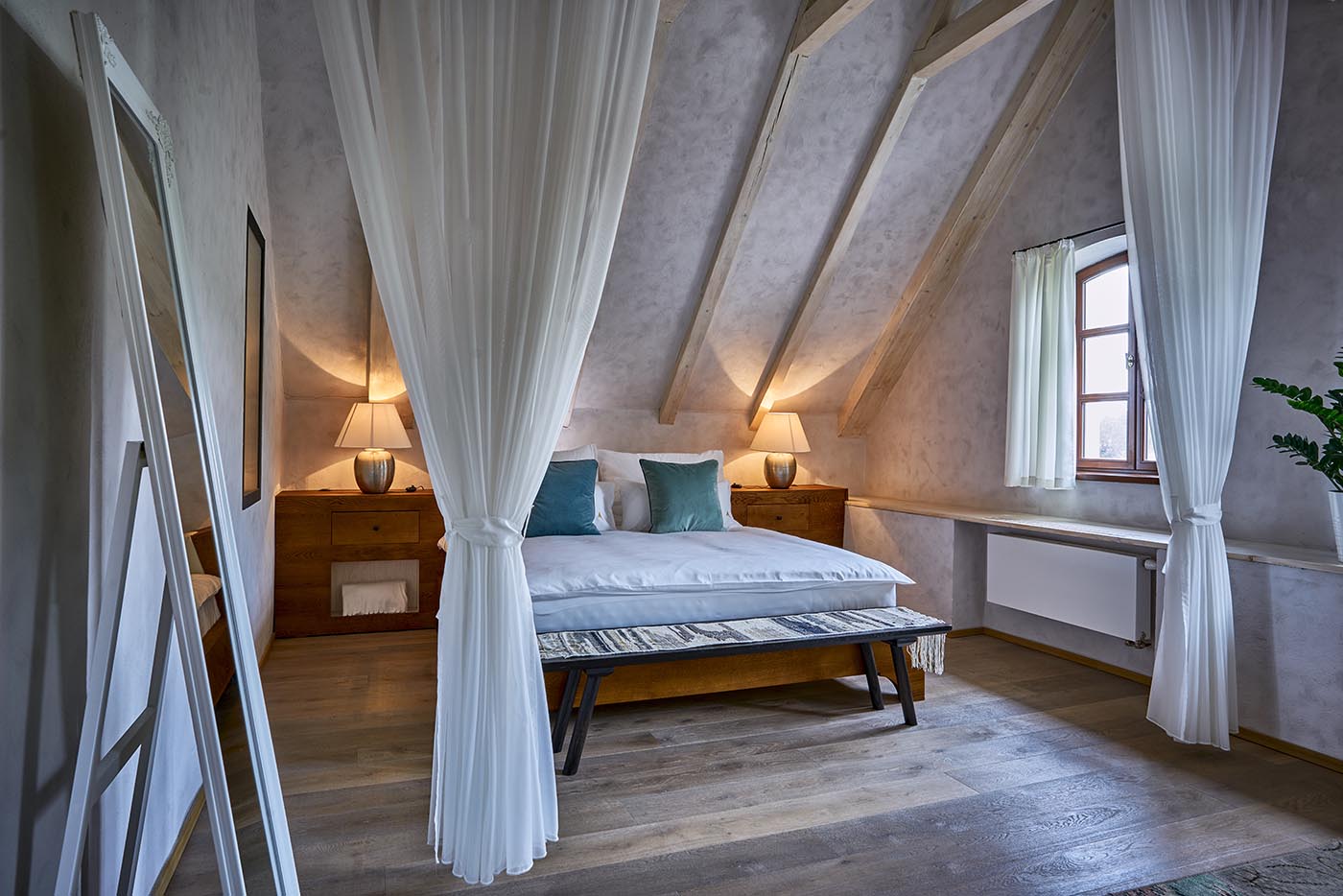 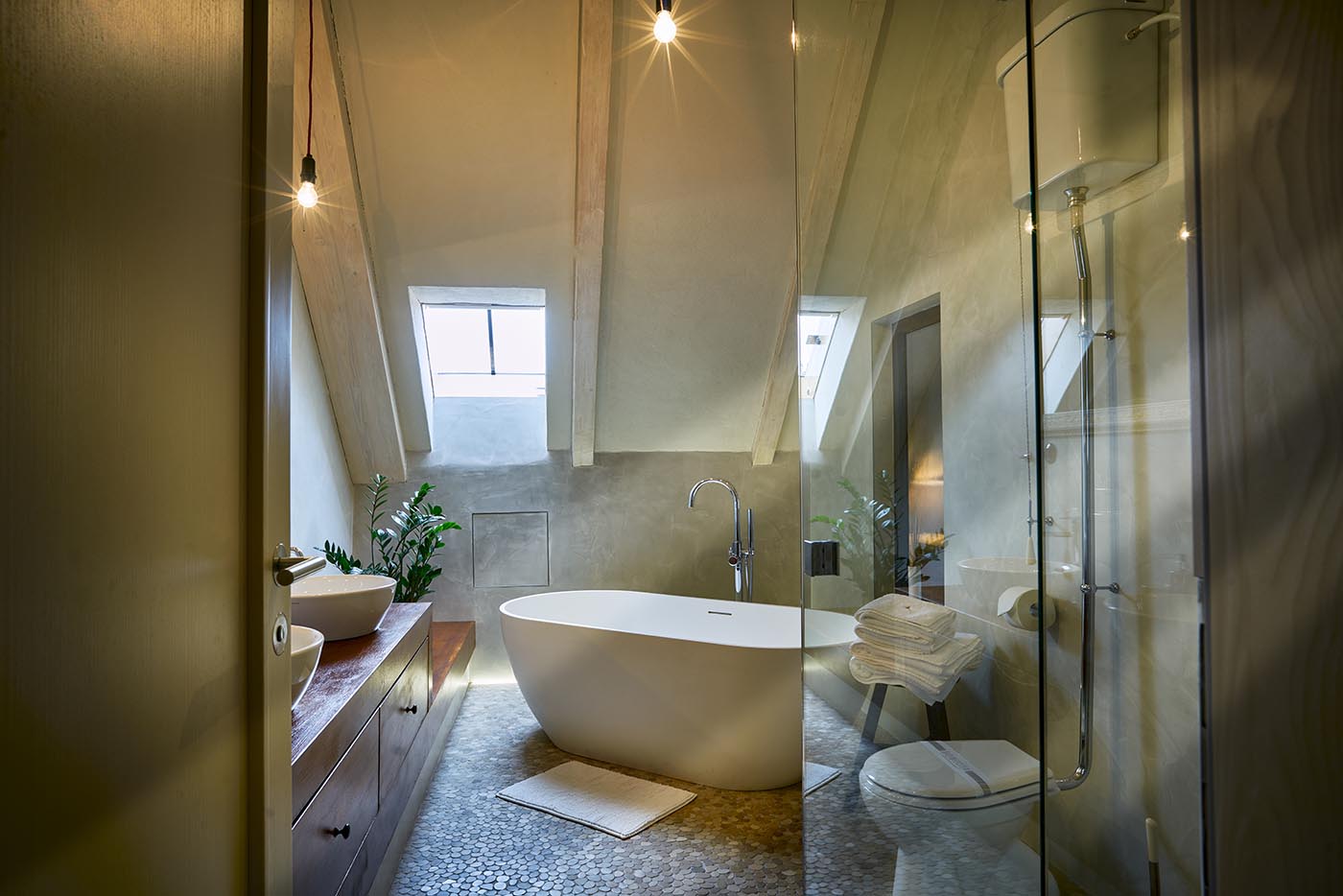 Reservation and Online check in

Mobile with low resolution :-(
Change it or use another.
Or you can send us and EMAIL!

How do I get to the winery and restaurant Salabka?

Salabka is located 8 km away from the city centre of Prague, 15 minutes drive by car. Salabka has parking availability at the property complex. Parking spaces are reserved for restaurant and apartment clients only.

You can also make use of the city's public transport. The bus number 112 departs from Nádraží Holešovice, which is on the Prague's Metro C line. The bus takes about 10 minutes and the exit station is called Botanická zahrada Troja. Then continue on foot and walk up to K Bohnicím Street. Salabka is just 200 meters from the bus stop.

Can we come to the restaurant with children?

During lunch time from 12.00 till 15.00, we have no restrictions on children. We can offer children's menu, high chairs and limited stroller storage.

During the dinnertime from 17:30, we reserve the right to refuse entry to children. Restrictions are unfortunately necessary in order to ensure the satisfaction of all clients of the Salabka restaurant.

What is the dress code?

Salabka is a fine dining restaurant. The recommended dress code is smart casual.

Can we visit a restaurant even if we have a special diet and allergy requirements?